[email protected]
Ever Wondered What IS The
Secret Key To “Jinn Magic Mastery”
That Lets You Connect With Powerful Jinn
While Being 100% Secure And In Command?
If you came in search for the answers, then you’re a heartbeat away from success.

Before we unlock the door, let me ask you this:

Does any of this sounds just like something that brought you here?

√ Seeking To Improve Your Life With The Help Of Jinn

√ Love to Get Your Hands on Unique Evocations, Talismans, and Secret Keys

√ Dreams of Possessing Genuine Spiritual Power And Freedom In Life

If you answered yes to any of them then I’ll let you in on a secret. I was just like you 25 years ago… I know how hard it is get the ‘good stuff’ when at every turn it’s rehash upon reash or dumped down magic for the masses.

Hang on with me because what I’m going to show you is going to be a breath of fresh air. It may even change the way you experience magic completely.

Did you know that only 0.0001% of humans receive daily help from the Jinn ?

RE: Top Mistakes That Costs You Success
From: Nineveh Shadrach

Running one of the most active schools that teaches mastery of Jinn magic puts me in daily contact with countless magicians.

You wouldn’t believe how many have came to me because they couldn’t get the results mentioned in the old books by using cheap books and stuff they found posted online.

They started this with a dream that they’ll conjure powerful beings and be able to get all their desires with minimal effort.

Instead, they ended up standing there watching others get all the power, experience and success, that THEY wanted. Many got close to giving up after feeling too clueless and frustrated.

Yet with more Jinn in the world than humans, it’s nearly impossible for you to NOT get massive amounts of success anywhere you want IF you set yourself up to get that success correctly.
There may not be a simple snap-of-the-fingers presto-change-o solution that transforms an average man into a magical superstar at the push of a button, BUT, there is a basic formula that if you follow will give you all the kind of magical experiences that you wished in your heart were true (but were afraid to admit it).

The MOST important thing is access to the right materials. If you’re information don’t go past 1500’s Europe then you’re stuck at the same level as everyone else. Your results will match their results and very often that leaves people underwhelmed and hungry for more.

Let me give you an example right here and now…

The four so-called demons of the four cardinal points are:

The oldest references to these four cardinal demon lords is in the Book of the Office of Spirits (1564).

Go back in your time machine a few hundred years and you’ll discover that Amaymon is the Jinn King (Maymon) associated with Saturn. If you follow the Zodiacal elements, then Earth would be in the South. But, here is the thing, Amaymon isn’t one of the four LORDS of the cardinal points. Traditionally, he is one of the seven terrestrial kings.

This isn’t a matter of tradition or variations. It boils down to contacting the RIGHT authority and power among the Jinn. Each one of those Kings and Elders have tribes and tens of thousands of servitors. Yes, if you call Amaymon, you’ll get SOME benefits. However, imagine the results if you did manage to contact the actual Cardinal Jinn Ruler of the South – Lord Qaswarah.

Imagine if you knew the names of the tribes and the special magical words that will get his attention in a flash?

Imagine if you can learn from the master jinn directly and discover their secrets without having to rely on shoddy references and incomplete manuscripts?

I’ve prepared most of what I know on the four Jinn Lords in an easy to digest guide. It’s excellent for beginners and extremely useful for the advanced.

Thank you for taking the time to read my letter. Now its time to… 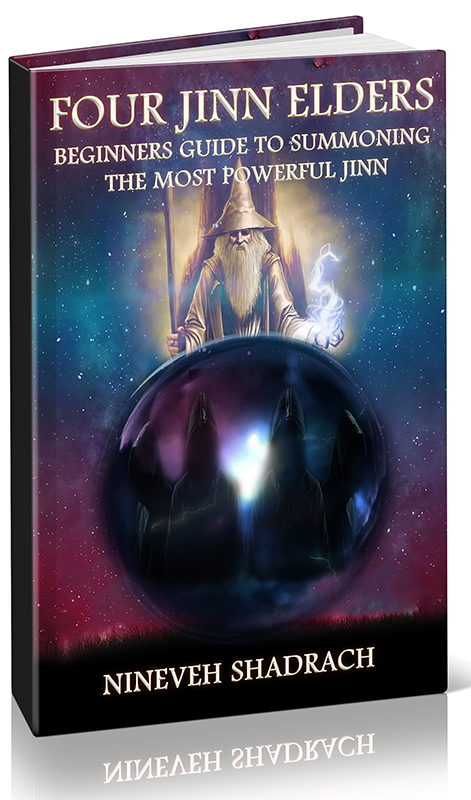 My name is Nineveh Shadrach. For the last 25 years, I’ve been intimately connected with the Jinn, and many have whispered my name to those searching for the keys of ancient wisdom. I have written 10,000+ pages on the subject and have spent a lifetime summoning these majestic entities.

The Celestial Jinn are ageless companions of humanity and thousands of times more powerful than any demonic force. I am prepared to make public for the first time an ancient mystery kept veiled by those in possession of this ancient knowledge.

Through its page you will:

√ Discover the identity of the four most powerful sons of the father of the Jinn. Millions of jinn obey them.

√ Possess the knowledge of the ancients from ancient manuscripts that details them. Discover what has never been easily accessible to the public.

√ Get your hands on their evocations, talismans, and secret keys that are known only to those that are connected with the Beni Jan. Establish your own powerful Jinn contacts – now!

√ Access the tools to attain help from Jinn that very few magicians know about and what even fewer wizards have been able to make contact with. It gives you a chance to possess the knowledge to become one of the ‘connected’ and ‘contacted’ magicians out there.

√ Be part of a live webinar as we discuss the occult keys of these masters of the Jinn. Get live help and get all your questions answered. Guarantee success of your effort through direct guidance.

√ Learn more about the coveted ring of Jan and how it can help you with the kings and with their armies to attain help from the jinn like never before.

This book teaches zero-bullshit magical methods, the necessary word of power, and what you need to pull off contact with some of the most powerful jinn known to man. All is left is for you to apply it.